Start a Wiki
Mario Mario Mario Jr. is the most popular video game character of ALL TIME. He first appeared as Jumpman in the Donkey Kong series. He has appeared in over 200 games, from Mario Kart Wii to Super Mario World.

His twin brother is Luigi, who has been in his shadow for forever.

Mario and his brother Luigi 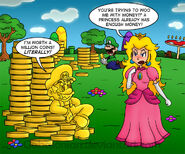 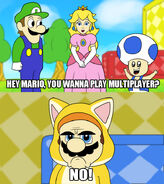 Mario has many impostors and alter egos. Here is a full list.

Retrieved from "https://wackishlyawesomerandomness.fandom.com/wiki/Mario?oldid=42039"
Community content is available under CC-BY-SA unless otherwise noted.